7 Theories and Trivia to Enjoy ‘Shin Godzilla’ Even More

Hi everyone! This is Ayumi, otaku writer for MANGA.TOKYO. Have you watched Shin Godzilla yet?

I know people who spend years pondering about the Evangelion movie series created by the same director, Hideaki Anno. After watching the new Godzilla movie I realized why. There’s been a lot of discussion regarding Shin Godzilla, and in this article I want to share with you a few theories that are circling the web world.

After watching such a dense and complex movie, you want to talk about it, don’t you?

Stop reading this article if you haven’t seen the movie, otherwise we’ll spoil some important plot points! Don’t say we didn’t warn you!

The Tail of Godzilla

There have been many discussions regarding the hideous tail of Godzilla we saw at the end of the movie. I personally thought that it looked like the mass production Evangelion. Anyway, what’s the deal with that tail? These are the most popular theories.

Anno created a short special effects movie called Kyoshin-hei Tokyo ni arawaru (Giant Soldier has Emerged in Tokyo) with Studio Ghibli. It was screened at the beginning of Evangelion: 3.0 You Can (Not) Redo and at the Director Hideaki Anno Special Effect Museum held at the Museum of Contemporary Art Tokyo where the figure of the Giant Soldier was also exhibited in 2012. The movie was about the Giant Soldier, who first appeared in Nausicaä of the Valley of the Wind, and would happen if he were to emerge in Tokyo today.

Since Anno was involved in both movies, many people are convinced that the Giant Soldier was born from the tail of Godzilla, and the story would then continue into the short movie Giant Soldier. Others are against the theory because the buildings in Shin Godzilla are not of present Tokyo but appear to be from the near future, as you can see the buildings of the Tokiwabashi redeveloping project that is to be completed in 2027, whereas the background of Giant Soldier is clearly in 2012 Tokyo.

Anyway, it’s exciting to think these two movies are somehow connected to each other since both are creations of Anno. 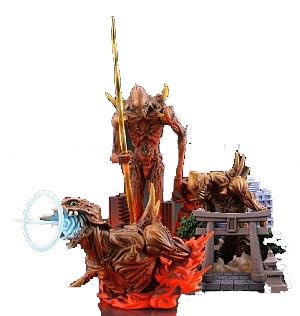 2. ‘Godzilla Just Before His Transformation’ Theory

In the movie, they had a discussion regarding the possibilities of reproduction through parthenogenesis where an individual could breed a colonia, and then those smaller zooids with wings could propagate all over the world. This theory insists that the timing of Operation Yashiori, an operation to freeze Godzilla, was impeccable and if it had been delayed by even a second, then Godzilla would have propagated asexually from his tail.

I personally think the reason for why the offsprings on his tail look like a human is because he had learned from his enemy, humans. He is a perfect creature that is able to continuously evolve, so he introduced human elements into himself during reproduction in order to attain the ultimate perfection, as humans are the only organism who can harm him. Godzilla is said to have 8 times more genetic information; therefore, the parthenogenesis theory is not totally impossible. It’s credible because the theory is fostered from actual discussions in the movie.

Some people believe that Godzilla is actually Professor Goro Maki, the godfather of Godzilla and the disgraced and exiled Zoology professor who suddenly disappears at the beginning of the movie leaving behind only his name. The fact that Godzilla first appeared at the spot where the doctor was lost into the sea makes it possible that he is somehow related to the awakening of Godzilla. Some say Godzilla ate or somehow absorbed the professor into his body, therefore the human lookalike figure of his tail is the professor himself. If so, how can anyone explain the hand-like figures that grew from his tail? Anyway, I think we have to wait until we’re told more about mysterious Professor Maki in order to consider this theory.

Apart from the speculation above, there are so many other theories buzzing around at the moment. However, only director Anno knows the truth. ‘The Art of Shin Godzilla’ will be published soon and we may find some clues from his interview.

There’s so much to talk about in the movie

The discussions on Shin Godzilla are vast and detailed. Some of them focus on many trivial details that make me shout ‘WHO KNOWS?!’ If Anno is really adding into his plott all these small details, he must be a genius. Let me introduce some of these trivia.

Anno is married to manga artist Moyoko Anno and the couple is said to get on great together. Did you realise that Anno embedded her illustrations into his movies?

The scene is based on a true story that happened after the Tohoku earthquake and tsunami. All TV stations were broadcasting breaking news all day long, expect for TV Tokyo which continued to show anime and variety shows. Many people said that it was therapeutic to watch something that reminded them of everyday life in such difficult times.

2. Cameo Appearance in His Own Movie

When Godzilla re-landed at Kamakura, the disaster prevention administrative radio immediately aired an evacuation order: that was actually Anno’s voice. He lives in Kamakura and his love of the city perhaps made him take on the role. He also appears as a bus driver when Godzilla lands at Kamata. He’s apparently taking videos with his iPhone of extras who were running around to escape. The video was actually used in the movie adding a sense of reality.

If you watch carefully, you’ll realize that when shooting a scene of dialog between two people, the camera is often angled as a viewpoint of one of them. For example, when Shimura and Yaguchi are talking, the scene of Yaguchi is captured from Shimura’s viewpoint. This direction gives spectators a realistic sensation and makes them feel as if they were there.

Did you wonder why the railroads of the Shinkansen were connected after the destruction brought on by Godzilla? It should be difficult to run trains on devastated railroads. I don’t believe that Anno glossed over this. Remember the scene where Yaguchi and Kayoko are talking about dropping a nuclear bomb? At that point they’re in the monorail station in Tachikawa. Why are they there? I think because they connected the railway from there to Tokyo station, where Godzilla is sleeping. Yaguchi’s childhood hobby was later disclosed as model railroads and that kind of makes sense that they chose the location site of Tachikawa. Obviously this is just a suggestion so far.

Shin Godzilla is a love or hate movie. However, considering the amount of speculation on the internet, it can be said that the movie grows on you after multiple viewings. If you watch the movie after reading my article, you might discover new things about the plot.

If you are not clear about something or have questions, please don’t hesitate to ask me in the comments! It’s fun to think together!

Editor’s note: We edited Theory 1 to reflect that Anno did not direct Nausicaä of the Valley of the Wind and was only involved in it (8th May 2017)

What is Godzilla? The Legacy of the King of Monsters