Hey everyone, This is Mokugyo, one of MANGA TOKYO’s most dedicated otaku writers! I have always loved manga and anime, and I have seen so many of them. Too many, actually. I also love art works such as ukiyo-e. There were so many famous and talented ukiyo-e artists in Japan: Hokusai Katsushika, Hiroshige Utamaro, Yoshitoshi Tsukioka, Kyousai Kawanabe, and many more.

Today, I would like to introduce you all to Isobe Isobee Monogatari, a unique comical manga series with illustrations that look just like ukiyo-e.

Ukiyo-e (lit. ‘pictures of the floating world’) is a type of art work that gained popularity in the Edo period (1603-1868) and depicts the everyday life of the people of that time. The ukiyo-e pictures are very vivid in color, and they are loved by people all around the world as one of Japan’s traditional art forms. The most famous ukiyo-e is probably Hokusai’s The Great Wave, but I have included a few more below to give you a clue of the ukiyo-e style.

Hokusai’s The Great Wave off Kanagawa, 1831

The three tiles in Takiyasha the Witch and the Skeleton Spectre

Hara on the Tokaido, ukiyo-e prints by Hiroshige

Isobe Isobee Monogatari ~Ukiyo wa Tsuraiyo~ (Chronicle of Isobe –The Life is Hard-) is an manga that is currently serializing in Weekly Shonen Jump, the popular manga magazine that publishes ONE PIECE and Naruto. Isobe Isobee Monogatari was first published in Jump in 2013 as a substitute work for ONE PIECE. Eiichirou Oda, the author of ONE PIECE, had to be hospitalized for a sudden illness, and there was a need to fill in the open space in Jump.

In that week’s Jump issue, there was a comment page titled ‘Apology for ONE PIECE author’s sick leave’, and right after the comments came an ukiyo-e gag manga. Because the apology was written in a serious tone, the readers were surprised by the comical story that came right after, and this made the story funnier.

The protagonist, Isobee Isobe, always says, ‘I will become a strong samurai’, but is actually a loser and a total slacker. This story illustrates this lazy man’s comical life, and is currently serialized in Weekly Shounen Jump. The manga already has 12 volumes.

The manga is drawn with an Ukiyo-e-like touch

The most fascinating thing about Isobe Isobee Monogatari is that the illustrations look just like an ukiyo-e. Many scholars believe that the origin of modern Japanese manga is ukiyo-e. However, there are only a few manga series which literally use the ukiyo-e style in their illustrations.

There once was a manga author named Hinako Sugiura who researched the Edo era and even published several books about Edo. She also wrote a manga using ukiyo-e pictures, long before Isobe Isobee Monogatari was published. However, unlike the comical Isobe Isobee, Sugiura’s manga had a serious and more academic context. 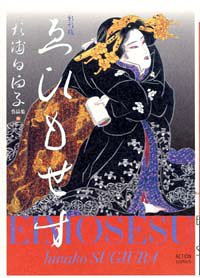 An example of Hinako Sugiura’s work