by Naja B
5 years ago

When you hear the words ‘boys’ love’ or ‘yaoi’ what images does it bring to mind? Do they bring up images of a happy couple on a date? How about a couple walking hand in hand down the street? Probably not. When you think about boys’ love, you probably only think about sex, hot gay sex to be precise.  But, why is that? Why is a genre that is supposed to be celebrating the beauty of homosexual relationships synonymous with things like ‘smut’ or ‘sinning’? Why is it that we only see the hypersexualized fantasy that permeates most of the BL genre? Why not the quiet intimate moments of two people in love? What makes the idea of a healthy homosexual relationship in the boys’ love genre such a rarity? When did BL become synonymous with sex?

Boys’ Love or BL as it’s more commonly referred to, is a genre of Japanese media that focuses on romantic relationships between men. Typically, BL is written by women for a predominantly female audience, but there are other genres depicting gay relationships, such as bara that are written by men specifically for a homosexual male audience. Of course, most people are just familiar with the much more generalized mainstream BL genre, that despite its intentions, tends to depict a rather skewed view of gay relationships. It’s no wonder that most people assume that BL is little more than the stuff of rampant fangirl fantasies. But is that really all BL has become?

I did a bit of digging and discovered a handful of series that give us a realistic look at the romantic relationships between men in Japanese media, specifically within the BL genre. Of course, this isn’t a comprehensive list, so, if you have suggestions that you think are better suited for this list, by all means, share them in the comments below!

The manga is currently licensed in English by Juné. Both volumes can be purchased either digitally or in print from their site. For a Japanese copy, check CDJapan.

Synopsis: Popular first-year Seryou Touji will date anyone that asks him out at the beginning of the week on Monday. The only catch is he dumps them all after just one week. So, when third-year Shino Yuzuru asks him out on a whim one Monday morning, he doesn’t expect much from Seryou. But, when the first-year accepts his offer, Shino becomes Seryou’s newest lover. At first, Shino is just curious to see what kind of guy would follow such a strange dating routine, but the more time he spends with Seryou, the more complicated his feelings become. Is seven days enough time to fall in love? Or is it just enough time for a beautiful delusion?

I honestly forgot that I had the Seven Days manga so it was a nice surprise to look at my bookshelf and see it there pic.twitter.com/hnPxE9T68v

This is just a short high school slice-of-life story that despite some minor shortcomings does an excellent job of normalizing the relationship between two male students. While the circumstances that brought Seryou and Shino together are a bit unrealistic, the way they handle their relationship is really what sets Seven Days apart from the rest.

When Shino asks to be Seryou’s one-week-girlfriend, not only does Seryou not bat an eyelid at the request, but he also accepts it and does his best to treat Shino the way he would treat any other lover.  They go on dates, walk to and from school together, talk on the phone, and all the other things you’d expect a high school couple to do. It’s not often that you see a same-sex relationship treated as something so normal. Usually, there is some level of oddity woven into the story, either the characters themselves are unable to accept the nature of their own relationship or an external factor threatens to expose the main couple as deviant. This is just a sweet story about two people gradually falling in love with one another and the ups and downs that come with starting a new relationship. You can argue that this is an oversimplified example of how a normal gay relationship should be depicted, but aren’t relationships supposed to be simple?

The manga is currently licensed in English by Renta! It can be purchased digitally from their site. For a Japanese copy, check CDJapan.

Synopsis: Hashimoto Shun, an aspiring novelist who is also gay became captivated by a melancholic young man, Chibana Mio, he’d often find watching the sea near his house late at night. Curious about the quiet boy, Shun approached him and the pair struck up a friendship. Not long after, Mio was suddenly sent away to an orphanage on the mainland. Three years later, Mio returns to the island and confesses his love for Shun. But, Shun seems hesitant to pursue a relationship with the now adult Mio. 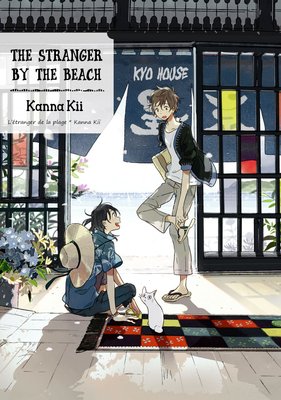 Umibe no Étranger (Eng. Title: The Stranger by the Beach) does something very few BL manga are able to do: it creates a wholly realistic gay character. While Mio is a ball of clichés, Shun is a much more realistic character, both as an openly gay man and as a romantic partner. When Mio returns to the island, Shun doesn’t immediately attempt to jump his bones, instead he is rather nonchalant in the way he deals with Mio’s unwavering affections. He takes the time to make sure that Mio, who up until this point identified as heterosexual, completely understands the gravity of pursuing a relationship with another man, especially given the stigma associated with their lifestyle, which is something that a lot of series seem to gloss over. Shun is an openly gay man and as such has had to deal with a great deal of ridicule from both his family and strangers, so his reluctance is understandable. Even after they do start up a relationship, Shun is still very passive in how he and Mio interact romantically, instead favoring a more laid-back approach.  It’s rare to see a gay character handled so well in a BL manga and I sincerely hope other authors take note, because this is how it’s supposed to be done!

The manga is currently licensed in English by DMP. It can be purchased digitally from Amazon.com. For a Japanese copy, check CDJapan.

Synopsis: A bittersweet love story about two boys in the springtime of youth. While preparing for an upcoming chorus festival, classmates Kusakabe Hikaru and Sajou Rihito strike up an unlikely friendship. The class slacker and the straight-laced honor student, two boys that never should have met, fall in love.

Doukyuusei (Eng. Title: Classmates) is one of my favorite series, because it perfectly captures all the complicated feelings that come with falling in love for the first time. If you were to replace either of the male leads with a female character, the story would still read the same. The fact that both Kusakabe and Sajou are men is irrelevant. The ups and downs that occur in their relationship are the same as any other, and it was refreshing to see such and honest and raw story from a BL manga.

What I liked the most about this manga was how open-minded some of the side characters were about the main couple’s relationship. Kusakabe’s friend finds out about the relationship, and rather than condemning them, he is supportive of Kusakabe’s decision.  He remarks that if Kusakabe is happy being with Sajou, then he figures it’s all for the best. As cliché as this kind of story is, I can’t help but find it somehow refreshing. First loves are something that everyone can relate to, so rather than simply being a sweet story about two boys in love, Doukyuusei reads just like any other romance story.

The manga is not currently licensed in English, but a Japanese copy can be purchased from CDJapan.

Synopsis: Hot-headed yakuza Harumoto meets his ‘Mona Lisa’, Mizuta, one night at a jazz bar. A chance encounter with the man of his dreams and with a happiness a man in his profession couldn’t dare hope for. But, Mizuta is hiding some secrets of his own…

When you think of yakuza, words like sweet and romantic are the last thing you’d think about, but Yasashii Anata is quite possibly one of the sweetest love stories I have ever read! In just a single volume, Nishida Higashi was able to tell a compelling and emotional romance story about two career criminals! Harumoto and Mizuto are like a couple of high schoolers in love, the romantic development between the pair is just so pure and innocent, a stark contrast to their less than savory professions.

The pair does initiate a sexual relationship, but Nishida Higashi had already laid a firm foundation for their relationship before that point, so the addition of the physical relationship only further validated their feelings for one another. Despite the title of this article, I do think sex is an important aspect of any relationship. However, that is only after first establishing a relationship between a couple first and Yasashii Anata does just that. Not only do we see Harumoto and Mizuto go on dates, but we get to see them actually holding a conversation. Whether it’s about their taste in music or literature, the author takes the time to build a relationship between the pair.

The manga is currently licensed in English by Vertical. It can be purchased digitally from Amazon.com. For a Japanese copy, check CDJapan.

Synopsis: The story focuses on the daily lives of a lawyer, Kakei Shirou, and his boyfriend, Yabuki Kenji, a hairdresser.

got it from Kinou Nani Tabeta?

a slice-of-life manga about a gay couple in Japan

they publish the full recipes! pic.twitter.com/dHG2eNNl2l

Last, but certainly not least, is one of the most realistic BL manga I have ever read. It isn’t technically even a BL manga in the first place. Kinou Nani Tabeta? (Eng. Title: What Did You Eat Yesterday?) is a seinen food manga about the daily live of a gay couple.

While this title is a comedy about food, the author gives us an intimate look at what life is like for Kakei and Yabuki. From shopping for groceries to work, we are privy to just about every aspect of their lives. Since they are already in an established relationship, they can be candid with each other about their thoughts and feelings a lot. That mirrors some of the conversations real couples have: bickering of the household spending or just talking about each other’s day. This might not be the most exciting title on this list, but relationships aren’t always full of drama or angst, so it was nice to see the often-overlooked mundane sides of their lives.

BL is Also About Feelings

When I compiled this list, I gave a lot of thought to which manga I wanted to include. I didn’t want to go too mainstream and risk writing a list full of titles that everyone had already heard of, but I also didn’t want to go too far out that I wound up alienating potential readers. My only hope is that this post gets a discussion going, much the same way Yuri!!! On ICE did a few months ago. There is more to the BL genre than just sex, and hopefully each of these five titles will convince you of that fact.