MANGA.TOKYO > Otaku Articles > ‘Atom the Beginning’ and ‘Astro Boy’: The Story of the First Anime

‘Atom the Beginning’ and ‘Astro Boy’: The Story of the First Anime

by manga.tokyo
6 years ago

Hello, readers of MANGA.TOKYO! It’s the anime and manga-loving writer, Mokugyo. April has started and Japan has finally begun to get a little warmer. This year in Japan, it was cold all the way until the end of March, so I’m happy that it has finally become a little more spring-like.

When April comes, many new anime begin. One of the anime I have high expectations for is Atom the Beginning. This story is the prequel to the famous series Astro Boy (Tetsuwan Atom).

Atom the Beginning Episode 1 Review: Birth of the Mighty Atom

Is Astro Boy, the basis for Atom the Beginning, just any kind of story? Astro Boy is an old manga series, and even today, many Japanese people do not quite understand what kind of story it tells. Let’s explore Astro Boy together!

‘Atom the Beginning’ is the prequel to ‘Astro Boy’

Atom the Beginning is an original story based on Astro Boy. It is a prequel centered on the question ‘What were Dr. Umatarou Tenma and Dr. Ochanomizu like before the creation of Atom?’

The main characters of Atom the Beginning are two young robot scientists, Umatarou Tenma and Hiroshi Ochanomizu. Tenma thinks of robots as something that have surpassed humans and are more like gods. On the contrary, Ochanomizu thinks of them as humans’ partners or friends. It is a youthful story about the development of the robot A106 by the two scientists. A106 is read as ‘A Ten Six’.

In Japanese, 10 can be read as ‘toh’ and 6 as ‘mu’, so the reading ‘atomu’ (Atom, which is how ‘Astro Boy’ is known in Japan) is also possible. One is able to predict that there may be a conflict between Tenma and Ochanomizu due to their opposing views. It is a story you can enjoy even if you don’t know the story of Astro Boy. However, knowing the story beforehand will allow you to enjoy the story more.

Astro Boy is a manga series drawn by Osamu Tezuka. Osamu Tezuka, who died in 1989, was called the ‘God of Manga’ in Japan. Astro Boy has a long history; from 1952 until 1968, it was serialized in a shonen magazine. In 1963, there was a monochrome anime adaptation. The Astro Boy anime adaptation was Japan’s first anime series.

Nowadays, there are plenty of TV anime being broadcast, but during that time period in Japan, anime, as it is now, did not exist. One of the reasons Astro Boy is respected by so many people is because it was the first TV anime produced in Japan. It is not an exaggeration to say that if not for Astro Boy, current anime would not exist.

From 2 episodes a tape to 25 in a DVD set. You've come a long way Astro Boy! #TBT #Astroboy pic.twitter.com/sQNX0XyBuo

What kind of story is ‘Astro Boy’?

Astro Boy is a story about a robot called Atom (known as ‘Astro Boy’ or ‘Astro’ in the English release) who fights other enemy robots. Atom is a kind robot who has the heart of a human and fights on their behalf. However, he is torn between robots and humans. Astro Boy is a very famous work so there have been many anime adaptations. However, through anime adaptations, the story and characters have been altered many times. Therefore, the image of Atom being torn between robots and humanity has faded.

Take for example the 2003 adaptation of Astro Boy which was broadcast on 6 April. In the original work, Atom’s date of birth is 7 April 2003 (His birth date is long gone!). To match with this timing, even though it is based on the original work, the adaptation arranged the story and characters very differently. One big change was that neither humans nor robots die very often.

In fact, many Japanese people do not know this, but in the manga, people often died. There were other kind-hearted robots like Atom, but they were used by humans so much that they broke down to the point of no repair. There were many stories like that. It goes without saying that one of the reasons Astro Boy was supported for so long is the character design, but the hard story was also a major factor. However, because Astro Boy is so famous, trying to adapt the storyline into an anime was a difficult process. I definitely want you to know this. 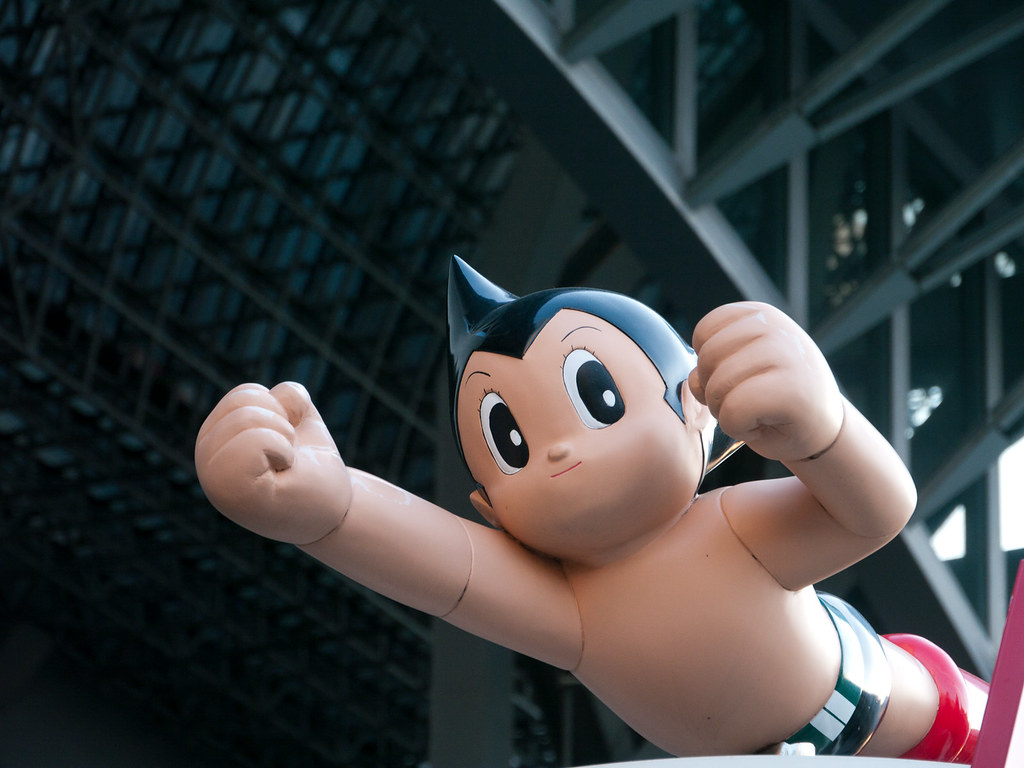 There is a popular story in Astro Boy entitled ‘The Greatest Robot in the World’. Pluto (known as Bruton in the English release) was created to be the strongest robot in the world. Ordered by the one who created him, Pluto proves he is the strongest robot on Earth by fighting with seven robots from all over the world,  Atom included. It is an entertaining arc about seven unique robots who all fight for the title of the strongest robot in the world. The arc’s main theme was ‘is the criteria for an excellent robot just their strength?’ and combined entertainment and a profound theme in great success. The arc was remade as a manga called PLUTO by manga artist, Naoki Urasawa, who is known for 20th Century Boys.

There is also a famous story arc called ‘Blue Knight.’ It is a story where a robot called Blue Knight leads robots who were being oppressed by humans and tries to make an independent country with only robots. This story is based on the American Civil Rights’ Movement in the 1950s and 1960s. Humans’ discrimination towards robots was a metaphor for white people’s racist treatment of black people. Societal issues are accurately reflected in the work. This episode was remade as Blue Knight Astro Boy From Blue Knight by manga artist Akira Himekawa.

Astro Boy finished many years ago. Its story though still lives and brings forth many remakes.

Atom’s creator, Dr. Tenma, is a genius but he is also a mad scientist with an uneven temper and an oppressive side. Atom was created to replace his son, Tobio, after he died in an accident. Dr. Tenma was affectionate towards Atom for a while. However, he got angry at the fact that Atom did not grow and sold him to a circus. Even though he made Atom himself, he sent him away for not being able to grow like a human.

This is how Atom came to work in the circus. It was in that circus that Dr. Ochanomizu found Atom, took him in and raised him. Dr. Ochanomizu is Atoms’s stepdad, so to speak. Dr. Ochanomizu remodeled Atom, giving him his searchlight eyes and jet engines on his feet, among the 7 abilities given to Atom. The reason Atom is kindhearted is also in part to Dr. Ochanomizu’s personality.

However, Dr. Ochanomizu can’t restore Atom when he has been extensively damaged. In the aforementioned ‘Blue Knight’ episode, Atom is destroyed. Dr. Ochanomizu could restore Atom’s appearance but he could not return him to the state of having a human heart. He failed at Atom’s restoration many times.

Here, Atom’s creator, Dr. Tenma, reappears and restores Atom. Actually, after letting go of Atom, Dr. Tenma has appeared in front of him many times to help him. His attachment to Atom is amazing. Dr. Tenma has an uneven temper and is oppressive. However, he also has a very human side to him, showing a fatherly face in front of Atom.

Astro Boy’s charm is also the contrast between Dr. Tenma and Dr. Ochanomizu. Atom the Beginning focuses heavily on the difference between the two scientists.

This is the beginning…

The original Astro Boy manga is very old so if you are not a big manga fan, you probably haven’t read it. Astro Boy actually has a very profound and serious story. I would like everyone to know of this manga!