by Chris Kincaid
5 years ago

Anime has its own visual vocabulary that can be hard to understand. Anime makes use of line, color, and deformations to convey emotions and action. Most anime watchers take these pictorial words for granted. Some, like speed lines, are easier to understand than a character suddenly sprouting cat fangs or having blood bursting from the nose.

These oddities come from manga where artists had to figure out ways to convey inner emotions and action using limited methods. Unlike prose, where you can get into the character’s mind, manga has the reader on the outside. Because of this, artists worked out ways to convey a person’s thoughts using external cues. After all, thought bubbles can only do so much when space is limited. Manga’s design emphasizes fast, cinematic reading. It sits between books and film, so it uses as much pictorial words as possible, just as film does.

Let’s look at some of these techniques.

How would you show action in a frozen medium like manga? Artists will sequence action across various panels to lend the illusion of motion. It works the same way as in anime, except the manga artist can’t draw hundreds of frames and have the reader make a flip book of them. Instead, they rely on speed lines combined with action key frames—the most important moments of action. Think of speed lines as visible air swirling because of the character’s movement. They can be used for comedic effect or accent an intense action sequence.

Sometimes the background of an anime will abruptly change to patterns of flowers or stripes, or other images. What the patterns mean can depend on the context of the anime. Some images have meaning specific to a certain story, such as floating stylized heads of a certain character laughing. Changing the background in this way emphasizes what the character feels: energetic, sad, happy, concerned, sick. Fast animations or twirling spirals show how quickly the character’s mind is working, much like gears in a clock. Wavy lines show irritation or upset emotions. Colors such as bright red are used for anger. Darker colors like purples or blues are used to show the characters are feeling sick, upset, or depressed.

Why do characters shoot laser beams from their eyes at each other? In English, we have an idiom—sparking a rivalry—that anime takes literally. Characters’ aren’t actually shooting lasers, except in some comedies. Rather, this represents their animosity for each other. Their gazes fight with each other. This image makes sense. We’ve seen people stare daggers at each other (another idiom) when they dislike each other.

Naruto and Sasuke are a good example of this visual!

Perhaps one of the most seen visual symbol in anime, the Popping Vein is a series of four U-shapes combined to create a cruciform. They appear over hair, foreheads, and sometimes hands. The Popping Vein has only one emotion: anger. It comes from how some people have veins that pop out in their temples when they are angry or their blood pressure rises. Manga uses the four-U shapes as minimal shorthand for this biological effect. 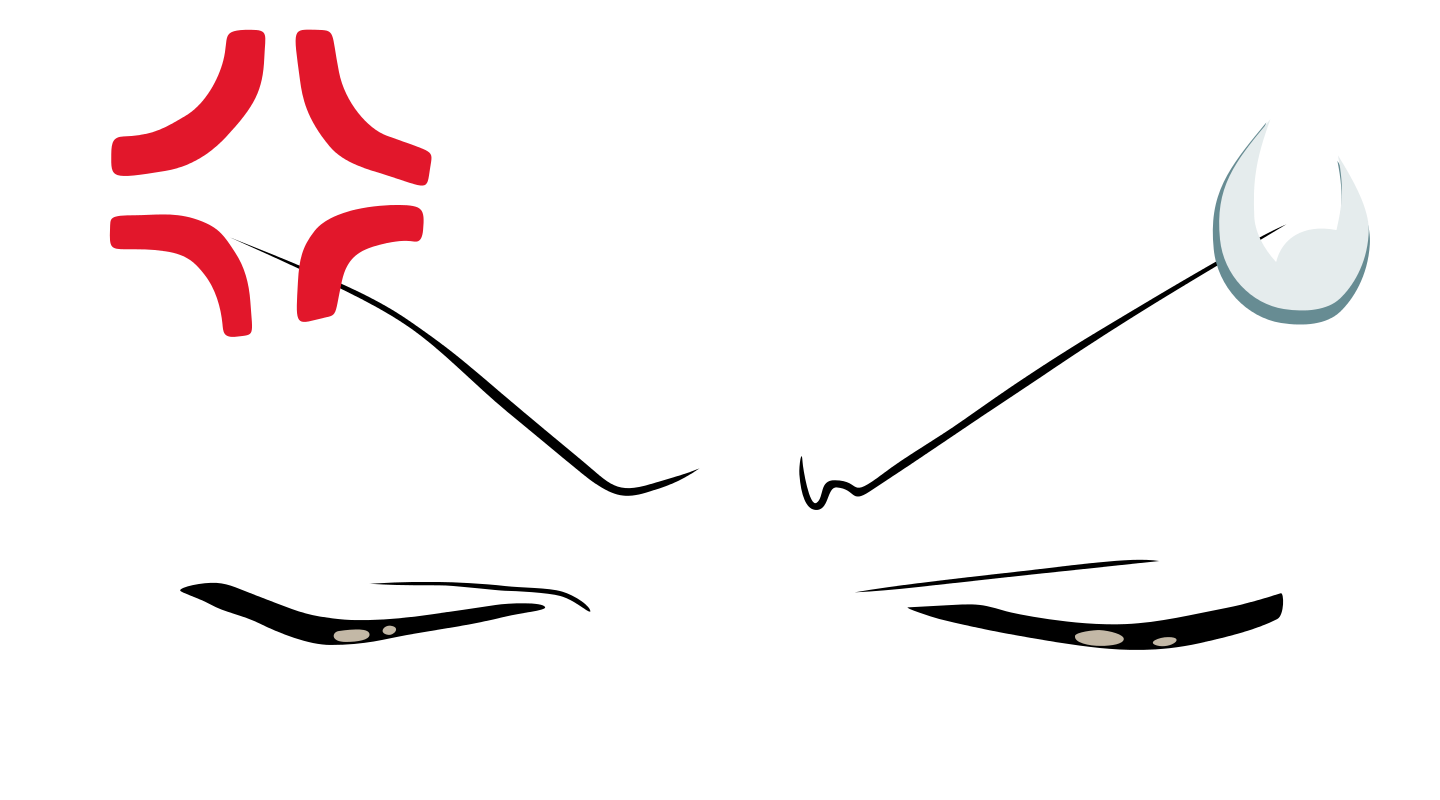 Another common symbol in anime, the sweat drop—a large droplet of blue over a character’s hair or face—shows embarrassment or anxiety or confusion. Context determines which of the three. Sweat drops combine with blush lines (lines of red color below the eyes) and with popping veins to help clarify the character’s feelings. Sweat drops and popping veins show anxious or confused anger. However, most of the time, embarrassment and anxiety combine. The size and number of sweat drops shows the level of the feeling. Large drops mean the feeling is overwhelming.

Usually you’ll see this with female characters. It is a visual play on the idiom ‘She’s being catty today.’ Catty characters are feeling mischievous. The cat mouth usually combines with dialogue or actions that invoke a sweat drop or some other anxious reaction in another character. Sometimes the cat mouth will appear when a female character is feeling sexually aroused and is acting catty about it, much to the distress of others.

@breebird33 I think it's cat mouth! like in anime – it's like making a cute or mischievous face pic.twitter.com/OIVx0cEr72

Japanese anime are frequently using nose bubbles when a character has fallen asleep. They are the equivalent of the ZZzzZZ sleep symbol. It’s not an exclusively Japanese sign, and the trope is found in many western animations as well. While a character sleeps, the nose bubble will bob, and it will bust when the character wakes. I’m not sure I’d like to see the real-life inspiration for this one.

didnt even take a month until an anime snot sleepy nose bubble popped up pic.twitter.com/zV1fPtsMCs

Similar to the Nose Bubble, the Ghost Balloon comes from a person’s mouth. The symbol appears when a character is injured, shocked, or horrified. They are ‘dying’ from it. The Ghost Balloon represents the spirit escaping the character’s body. Sometimes, someone tries to stuff the soul back in for more comedy.

The Nose Bleed is the most notorious and confusing symbol. Anime characters seem to spout blood at random, but their spurts are far from random. They represent sexual arousal. As blood rushes to…certain body parts…potential censorship ensured that a way had to be found to represent this arousal in a way that is not directly related to sexual images. Anime focuses on the face, so the idea of rising blood pressure combined with this to create the nosebleed. Manga writers used the effect for comedy—giant fountains of blood erupt from horny guys while girls suffer the embarrassment of trying to hide theirs. Embarrassment underpins much of anime’s humor.

What they see & what I see when I have a nose bleed pic.twitter.com/euesTEyDNh

Deformations jar those new to anime. You’ll watch a show and out of nowhere the character suddenly looks different. Sometimes they are long and move like noodles; other times they deform to short characters with large heads (called chibi). Deformations show extreme emotion. The noodle transformation coupled with waving in the breeze means the characters are overwhelmed by the situation or simply don’t care. Deformations depend on situation. They lack standardization, so you’ll have to pay attention to the situation they appear within. Chibi usually mark a break in serious sections of the plot for comedy. You’ll see perverted men, for example, appear as chibi when they are being rambunctious. But you’ll also see these deformations during childhood flashbacks because of the cute quality of the deformation. Again, it depends on context.

Anime has many other symbols such as the orz (the word looks like the action it names: a person collapsing in defeat). Some are standardized like the nosebleed, but you’ll also see symbols specific to an author’s work or animation studio. For example, the Tales of series of video games uses thought bubbles that contain various anime symbols such as the Sweat Drop but also symbolism unique to the series, such as wavy purple lines. These symbols seek to convey emotions in an immediate way. The results can be confusing for those new to the medium, but they can also be effective once you get onto them.

The trick is to keep watching and reading. Exposure to various styles of anime symbols will help you build up a mental reference book of the sorts of situations these symbols appear. With time, they will become immediate indicators of character emotions and mental states. The funny part about this, you won’t realize you are making the connection. The symbols will become similar to reading this article—you interpret letters and words without much thought. You forget how you had to learn these symbols.

So, whenever a new anime fan asks you about them, remember that you had to learn the language at some point too. It’s a good opportunity to introduce someone else to the stories anime and manga convey.

In Otaku 101, the geek writers of MANGA.TOKYO try to answer some of the most basic anime and manga questions of otaku everywhere, like ‘what is onomatopoeia‘ and ‘is fansubbing and scanlating theft?’

You can read all the articles here.