by Thanasis Karavasilis
4 years ago

Twenty six letters. These are the building blocks that every single writer of English has to work with to build words into sentences and sentences into texts. And most of these words are included into these peculiar books we call dictionaries.

Fune wo Amu is a love song dedicated to those words. It has no discernible enemies and no flashy super powers, but that doesn’t mean that they do not exist in its realistic world. Episode 3 begins with a super power and ends with the appearance of the first enemy.

Love is powerful. At least powerful enough to make Hajime fall down to his knees as soon as he sees Hayashi Kaguya looking at him under the full moon. What seemed like a dream as soon as Hajime woke up was conjured into reality when he saw the girl on his way to work. Kaguya-san is the grand-daughter of Majime’s housekeeper, a Japanese chef-in-training that came to live with her mother because of her new job at a nearby restaurant. Majime is mesmerized by her. So mesmerized that his usual awkwardness turns his first conversation with her into a cute disaster. He is unable to utter a single word and instead leaves without even offering his name. Majime, for his love of words, is unable to properly communicate with other people. He feels so bad about this incompetence that he walks deep in thought and even bows to a street pole he bumps into. Many people, especially those who have no trouble in expressing their thoughts, have trouble relating to people like Majime. When they encounter introverted ‘weirdos’, to borrow Nishioka’s word, they usually misinterpret their silence or awkwardness as misanthropic or snob. Majime, and the people like him, are neither.

Why can’t I ever say what I want to?

Majime feels more comfortable around the books and words of his new job. I was so jealous when I saw his work routine. Searching for words, pondering on their meaning, consulting the greatest dictionaries…this is like the best job ever. I’m sure that not many people would agree with me, but I would have loved the opportunity to work in such a job. This is one of the amazing things about anime; the medium is in many ways like a dictionary. Matsumoto-sensei, in the team’s monthly meeting, said that an editor needs to become interested in many things just like a dictionary contains words that refer to many different subjects. The same is true about anime. There are so many series and so many different themes, that you find yourself learning about things you wouldn’t have thought of searching for yourself. That’s why we believe in Manga.Tokyo that the Themes and Trivia section of our reviews is important and, we hope, interesting. Because the world is a wonderful place, and there are so many things we can learn from it.

By the end of the episode, Majime will have found a new friend in Nishioka. Both have something they each admire: Nishioka admires Majime’s passion for what he does, and Majime is envious of Nishioka’s way with the spoken word. A friendship built on admiration is a friendship built on a steady base. Hard work is fun. Passion is fun. Friendship is fun. Love is fun. Dictionaries are fun! But if our group wants to keep on having fun, they must do something about those cancellation plans…

Onomatopoeia: Usually, manga use onomatopoeia to translate on the paper different sounds. This episode featured a unique take on the technique that is definitely one of the highlights of the episode. When Majime looks at Kaguya he falls deeply in love and his heart aches as the kanji for the word pain (苦) fills the screen.

Kaguya: I believe in love at first sight. I also believe in couples that their attitude towards life is compatible enough to make them perfect for each other. In case you think I am a hopeless romantic, I assure you that I’m not. I don’t believe in the one, but I do believe that each one of us is a jigsaw piece and there are certain pieces out there that fit more than others. In this case, I think that Majime and Kaguya fit each other perfectly. I am rooting for them. Let love bloom!

Meaning of Names: I really like when a name means something. My name, Thanasis, comes from the Greek word for immortal. Yeah, I have boasted about it in a couple of situations, but most of the times I just wished for it to be true, the immortality thing I mean. Japanese names, because of their association to kanji and to Japanese folklore, usually have a special meaning. Kaguya says that she was given her name because the night she was born there was a full moon. I remember the character from Inuyasha, but other than that I had no idea what she meant. After some light research, I found out that the name refers to a Japanese story, ‘Tale of the Bamboo Cutter’, about a bamboo cutter who finds a girl in a bamboo stalk and adopts her. In the end Kaguya is taken back to the moon, her true home of the Princess of the Moon. The Tale of the Princess Kaguya by Studio Ghibli (2013) was based on this story. 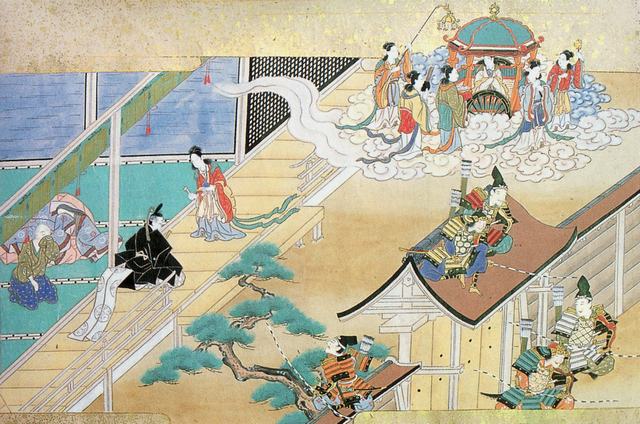 Kaguya-hime goes back to the Moon, Taketori Monogatari (竹取物語, The Tale of the Bamboo Cutter)

Word of the Episode: Love (こい、恋、koi)
a feeling of strong or constant affection for a person
人を好きになり、いつもでもそばにいたいと思う気持ち
e.g.  He fell in love and his heart ached for the first time

Fune wo Amu keeps getting better and better. Many people I’ve talked to consider it boring and a little uneventful. It is. It really is. And that’s a good thing. Fune wo Amu is niche. If you like it, then there are reasons, real reasons, you do. These reasons must have something to do with your own reflection on life, your own love for words, or your inability to express yourself properly.

What I really liked about this episode was that it showed that there is hope for the most awkward of us and that there is a home for each and every one of us.

I really hope that Majime will manage to talk to Kaguya and that she is at least a little interested in him. They could make a very cute couple, dedicated to each other and to their purpose. So romantic.

Did you like this episode of Fune wo Amu? Let us know in the comments below, and don’t forget to read the rest of our weekly reviews here on Manga.Tokyo!

Fune wo Amu (The Great Passage)

All reviews for Fune wo Amu